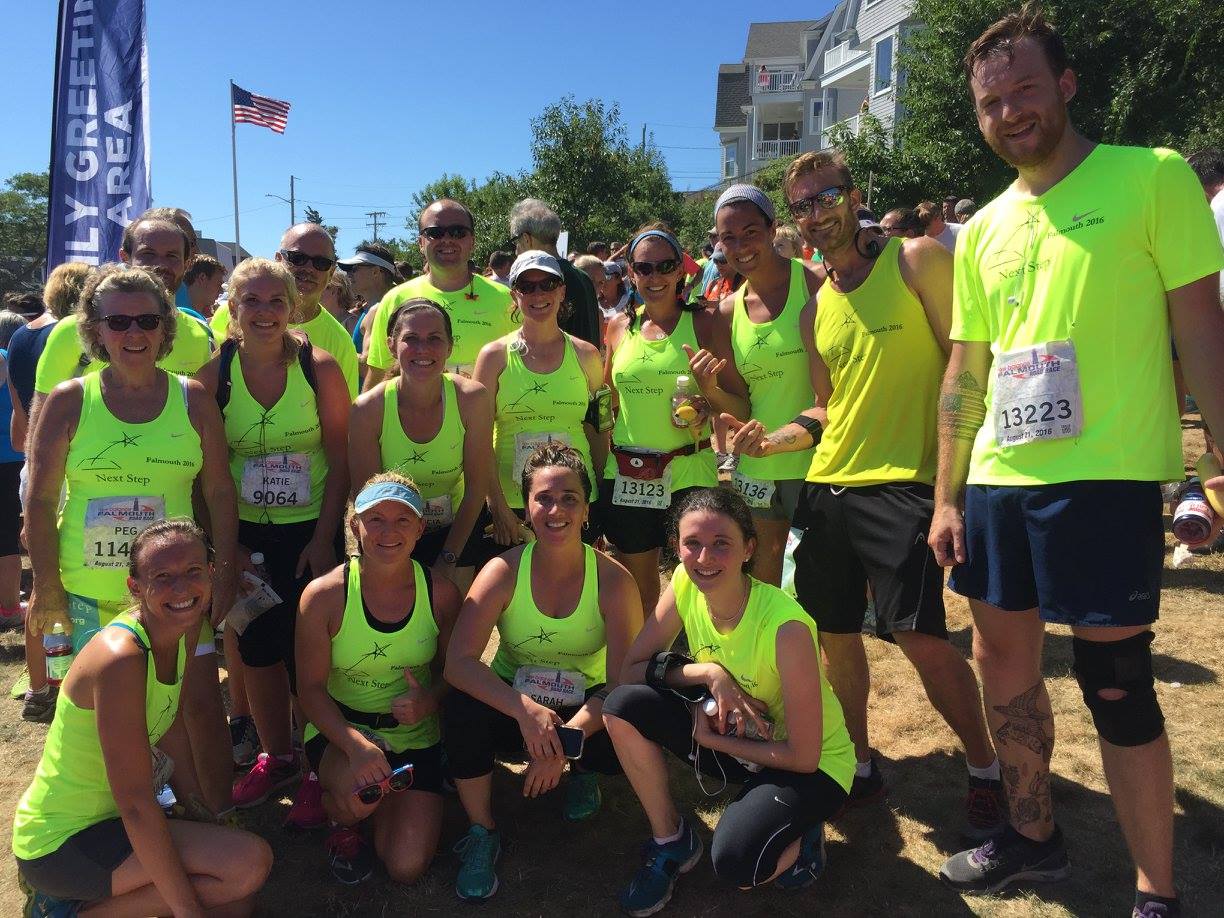 Catherine Ndereba, Meb Keflezighi and many other elite runners have traveled to Cape Cod to conquer the gorgeous 7-mile Falmouth Road Race in front of 75,000 spectators. Now it is your turn!

Team Next Step is running the 7-mile New Balance Falmouth Road Race on Cape Cod for an 9th time on Sunday, August 18, 2019!This year we are thrilled to announce that we have 25 open spots on Team Next Step. We also host an annual post-race cookout at a runner’s house near the finish line in Falmouth, MA. Your friends and family are welcome to celebrate with us!

Our fundraising minimum requirement is $1,000. We offer both fundraising support and training support so you are prepared to run the summer race on Cape Cod.

Email Nancy Hays, Next Step Development Director, if you have any questions about running the 2019 Falmouth Road Race with Next Step.

CLICK HERE to make a donation if you cannot run the Falmouth Road Race but would still like to support our mission to empower young people living with serious illness to create their brightest future through community, music, mentorship.

A heartfelt thank you to Turkish Airlines for sponsoring our event!

About Turkish Airlines
Established in 1933 with a fleet of five aircraft, Star Alliance member Turkish Airlines is a 4-star airline today with a fleet of 333 (passenger and cargo) aircraft flying to 300 destinations worldwide with 251 international and 49 domestic. According to the 2017 Skytrax survey, Turkish Airlines, already having a six consecutive years of“Best Airline in Europe” award between 2011-2016, now chosen as the “Best Airline in Southern Europe” for the ninth consecutive times. Having won the “Best Economy Class Onboard Catering” award in 2010, Turkish Airlines also awarded as the World’s “Best Business Class Onboard Catering” in 2013, 2014 and 2016, and 2017. Winning the “World’s Best Business Class Lounge” award in 2015 and 2017, the global carrier also picked up the World’s “Best Business Class Lounge Dining”award for the third consecutive years according to this year’s survey results. More information about Turkish Airlines can be found on its official website www.turkishairlines.com or its social media accounts on Facebook, Twitter, Youtube, LinkedIn, and Instagram.

Now that Thanksgiving is behind us, we thought it was time that we asked our team members to give us their top 3 favorite holiday movies!

Here's what Jess, Next Step's Director of Operations, gave us.

We think she might be a big fan of Elf!

What are some of your favorites!?

Tomorrow is @givingtuesday and it’s a big day for us, especially this year. If you help us reach 80 donations of any amount, a generous friend of Next Step will provide a $5,000 gift to support our FREE programs for teens and young adults living with cancer, HIV and rare genetic disorders.

That’s right. ANY amount you donate will help us get closer to providing this life-changing gift for seriously ill young people that need our support. $1, $10, $100. It all helps.

➡️ Donate now in our bio link and help us get a head start before tomorrow.