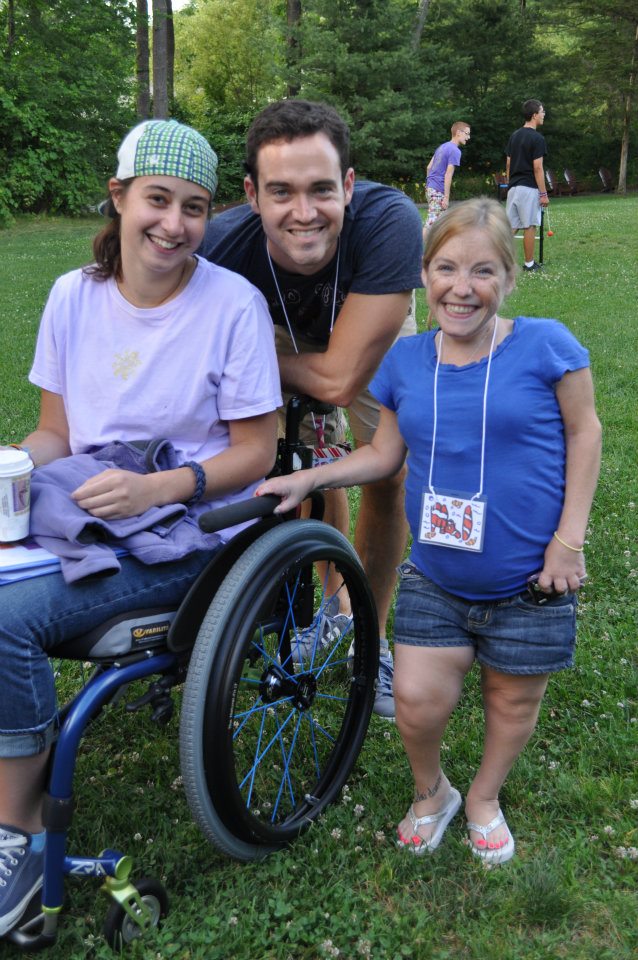 I had my doubts as soon as I rolled into the lobby at my first Next Step Conference, in the summer of 2011. Name Tags? Duct Tape Art? I was sure this was going to be a fluffy child-like experience, and I was ready to get back in the car and go home. But just a day later I felt like I had been there a week. And by the end of the conference I had made friends for life.

Since I was little I had a myriad of “issues” which my family and I mostly shrugged off. I imagined, when people would say: “Life’s Tough”, that they were referring to the extreme fatigue, the nerve pain and joint pain and other symptoms which bothered me, so I didn’t worry about it much. Then when I was in my second year of college my symptoms progressed very suddenly and it was clear this wasn’t normal.

Within a few months I went from walking normally to falling all the time; I lost weight, and was constantly out of breath. My school suggested I might want a semester off, but I refused. I study physics, which I LOVE, and there is no way in hell I will ever give it up.

It was a long road, but I was eventually diagnosed with Mitochondrial Disease, a progressive disorder of energy metabolism that causes multiple organ dysfunction. Somehow, I went from being a kid who did every sport from snowboarding to outdoor rock climbing to horseback riding, to being in a wheelchair, with feeding tubes and a central line.

As you can probably imagine, being a college kid whose fridge is filled with IV nutrition bags instead of beer, whose room is a mini ICU, and who spends practically all her extra time at the hospital is pretty isolating. My friends at school don’t worry about surgeries and admissions, they are wrapped up in grades and classes and dating.

I heard about Next Step from an older acquaintance with Mito. At first I was skeptical, but my neurologist urged me to try it. I am so glad that I did. The environment is open and honest, fun but also serious. Next Step aims to guide and support young adults with chronic diseases as they become independent citizens of the world and achieve their dreams. I went zip-lining in the forest and felt more free than I had since I started using a wheelchair. I met kids my own age who really do have to think about surgeries and insurance coverage, and even played “Back in Black” on electric guitar at our Rock Concert.

This spring I am graduating college and hoping to go to graduate school in theoretical physics. The path ahead will have its challenges but I feel more equipped to handle them, more confident, and less alone because of Next Step.

-Sarah Geller, Next Step participant since 2011

#ChildhoodCancer is not just one disease.

There are over 12 major types and more than 100 subtypes.

Diagnosis rates are on the increase.

Got any plans on Monday, October 17th? We've got something you don't want to miss out on!

@mccourtytwins are hosting the McCourty Bowl to support Next Step and @bostonmedicalcenter ! Come out and test your bowling skills and support programs for young people with sickle cell disease.

Visit the link in our bio to learn all the details about the event!

The kick-off of Next Step's 2022 Fall STRIVE program is coming up on October 1st!

STRIVE is an after-school mentorship program for students with sickle cell disease. This program invites students into an environment of peers who know the challenges of sickle cell disease. Students also have an opportunity to work on a community project with their peers, like this amazing comic book.

Visit the link in our bio to learn more about our STRIVE program, how to apply, and the projects from previous semesters.